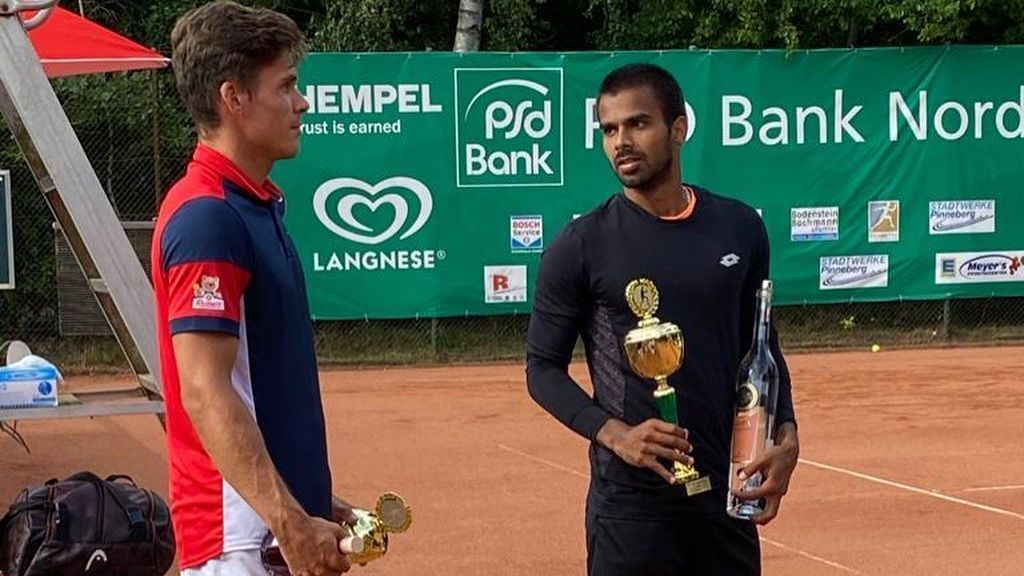 In a town in northern Germany, far from TV cameras and the media glare, Sumit Nagal became the first Indian to win an international tournament in the Covid era. It was a bittersweet moment. He should have been hundreds of miles away, preparing for Wimbledon; instead, he was holding aloft the winner’s trophy in the PSD Bank Nord Open, a locally organised clay court tournament at the Pinneberg tennis club, two hours away from his home in Peine.

For Nagal, who last played a competitive match in early March during the the Davis Cup reverse singles against former World No. 3 Marin Cilic of Croatia, deciding not to fly back to India soon after was a prudent call.

“It felt good to be out there after almost four months,” Nagal tells ESPN. “Just to be in a tournament at this point was both unreal and great. It was a small, nice event with under 60 players and not too far from where I train (Nensel academy) so I thought to myself, ‘hey, why not play some matches?’ I knew India would be tough to be in if I returned after the Davis Cup tie.

“The system is awful back home in the country, so I’m not surprised to see what’s happening there (rising virus cases) right now.”

Germany, however, has managed to handle the contagion with reasonable success, imposing one of the strictest lockdowns in Europe in early March. Nagal moved into his friend’s place for the weeks that the country was shut, dividing his time between Instagram, body weight reps and League of Legends battles.

The tournament experience itself was starkly different from any he’d played before. Players went through temperature checks and had to sanitise their hands before they got on court. The modest size of the tournament, with only few players and spectators present, took care of the social distancing norms for the large part.

“Everyone had to stay at least two metres away from each other. It’s something you had to keep reminding yourself just like the frequent hand sanitising. Also, only two players were allowed to use the locker room at a time. Since it was a small tournament these aspects were a lot more easily manageable.”

Unlike Nagal, other top Indian players – Prajnesh Gunneswaran, Ramkumar Ramanathan, Saketh Myneni, Leander Paes and Rohan Bopanna – are back in the country and still perhaps months away from a competitive match. Though the tour is scheduled to resume on August 14 and the US Open slated for later in the month, uncertainty still looms. The Novak Djokovic-helmed Adria tour exhibition series, which had to be called off midway through its Croatia leg recently after several participating players including the World No. 1 tested positive, may have far-reaching ramifications.

For most players like Nagal who sustain themselves on a week-to-week tournament paycheck, a delay in tour resumption could be a bigger financial blow.

“I’ve been using up my savings,” he says. “There wasn’t much anyway, to be honest. But this is how it is I guess.” Being ranked just outside the margins of the top 100 also doesn’t have him falling within the bracket of players to whom financial aid is being extended by the ITF and Djokovic’s Player Council.

“I agree with Somdev’s (Devvarman) suggestion that arranging loans for needy players may have been the smart thing to do than paying players $2000 or $4000 dollars which doesn’t change much in anyone’s life. There might be higher-ranked players who may need the money more than someone who’s a well-settled senior ranked low; obviously, no one’s going to turn down free money. Tennis is a selfish sport and I guess that’s how it’s going to be.”

For now, Nagal is counting on the advantage of his location to play the odd tournament that pops up.

“I’ve nothing planned. I’ll play whatever comes my way. We’re not sure what’s going to happen in August and whether at all the tour will restart then or we’ll get to play.

“For me, visiting home (in New Delhi) still seems a long way off. I’ll be surprised if I get to go at all this year.”