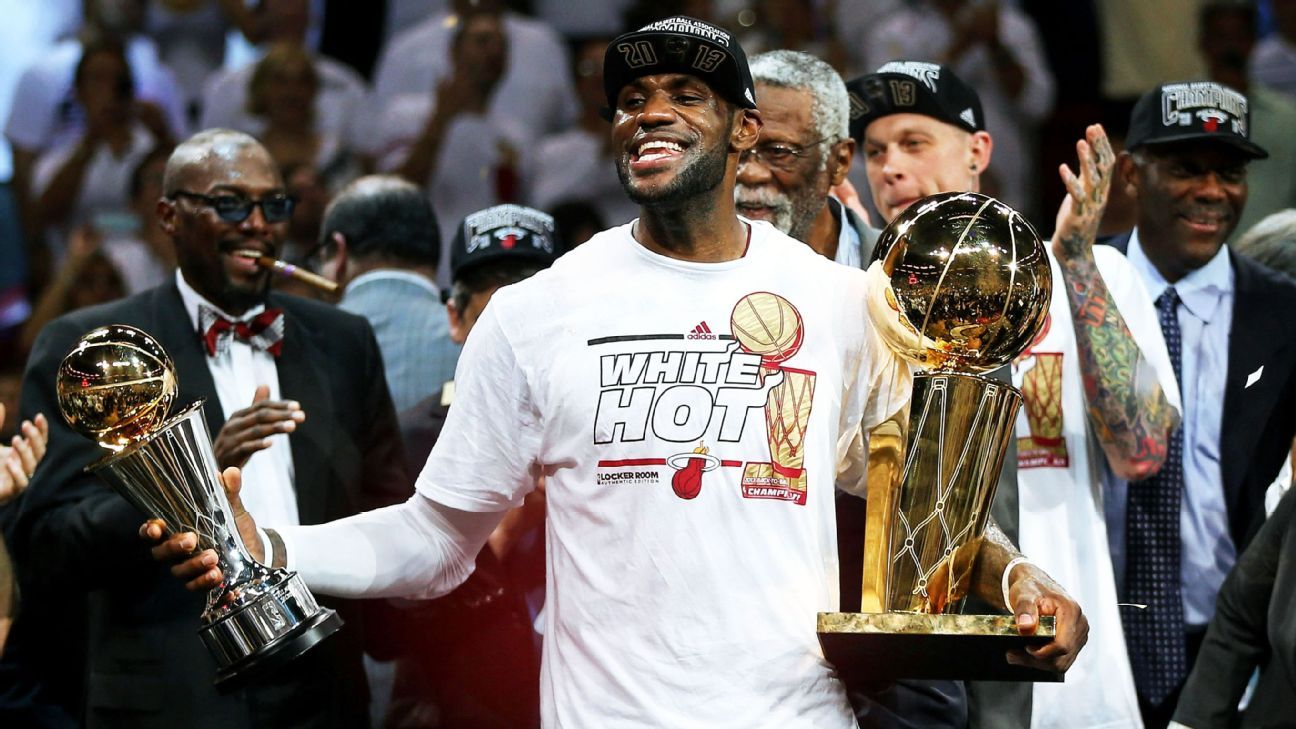 It was 10 years ago today that the most anticipated free-agency period in NBA history began, culminating on July 8, 2010, with The Decision and LeBron James announcing that he was taking his talents to South Beach.

We asked our NBA insiders to reflect on the show, the fallout and LeBron’s time with the Miami Heat — which produced four trips to the Finals and two titles before he returned to Cleveland — and what all of it meant for the NBA.

1. What do you remember most about watching ‘The Decision’ 10 years ago?

Kevin Arnovitz: The extent to which it was produced. James and his camp had already fashioned his free agency as a competition reality show, and the announcement was the culmination. In many respects, unbeknownst to anyone at the time, The Decision was a pilot for a decade of shows produced by and starring athletes. That night almost seems quaint now.

Chris Herring: I was working for The Wall Street Journal and was sent to a New York bar to cover local reaction to LeBron’s choice. It was a reaction that’s been somewhat fitting for the better part of the last 20 years: Knick fans being disappointed. There was speculation that LeBron announcing the decision in nearby Connecticut would bode well for the Knicks’ chances. It didn’t.

Jackie MacMullan: I happened to be in Bristol doing SportsCenter in the days leading up to The Decision. Even though ESPN was going to broadcast it, most of us thought it was a horrible idea, and I recall saying on the air, “LeBron, it’s not too late. Don’t do this!” I called David Stern a day before The Decision, and he made it clear he would have no comment. But, when I asked him off the record, “Did you try to talk LeBron out of it?” he snapped back, “What do you think?”

Dave McMenamin: I was covering Kobe Bryant’s basketball camp in Santa Barbara the day before, and all anyone wanted to talk about was what LeBron was going to do. I went out to dinner that night with some of the camp coaches, and we watched Chris Broussard say on SportsCenter that Miami was going to be the destination. So, tuning in to the actual show the next day, it was more about looking to see LeBron say it and how he was going to say it. And as soon as he uttered the “take my talents” line, it immediately made me think of 17-year-old Kobe, with a pair of Oakleys on his head, announcing his decision to skip college and go straight to the NBA.

Royce Young: The anticipation. Once it was announced, the speculation machine cranked to hyperspeed. But even with reports surfacing of LeBron leaning elsewhere, the general feeling was no way he’d go on national TV and break his hometown’s heart. The whole thing was uncomfortable, especially the time fill that had to occur before LeBron actually got to announcing his choice. But the 24 hours leading into it was really the birth of the transactional fever era we live in now.

2. Looking back now, which was more surprising: LeBron’s TV special, Dan Gilbert’s letter or the Heat’s “We Did It” rally?

Young: The letter is the most shocking of the three, just because the potential consequences of that shouldn’t have required hindsight to see. It was an emotional reaction, sure, and in the end it didn’t prevent LeBron from returning, but it was certainly a hurdle. A Decision-like announcement is kind of the norm now, and hyping seismic transactions isn’t unusual. But an owner absolutely blasting a player publicly — a franchise icon at that — is a pretty unthinkable thing in 2020.

MacMullan: The Heat rally. The Decision was incredibly ill-advised and self-indulgent, but we all knew it was coming. Gilbert’s scathing reaction was somewhat predictable, since he found out LeBron was leaving at the same time as the rest of us. But that rally was so over the top. I will never forget the look on Pat Riley’s face when they panned to him in the stands. He looked mortified. Riley told me years later he was so busy making sure all the contracts for LeBron and Chris Bosh were in order that he didn’t pay much attention to what the team had planned. It showed.

Monday through Friday, host Mina Kimes brings you an inside look at the most interesting stories at ESPN, as told by the top reporters and insiders on the planet. Listen

McMenamin: Gilbert’s letter. The TV special raised millions for charity. The rally was over-the-top and premature, but it was rooted in joy. The letter was hateful and ugly.

Arnovitz: Gilbert’s letter, because it was the only of the three that was a spontaneous event. With a few exceptions, NBA principals are exceedingly filtered androids. The letter by Gilbert was sheer, raw resentment written by someone without the counsel of anyone.

Herring: Probably the rally. There really was no possible upside to having one. Someday down the line, I could see another superstar hyping up his free-agency decision with a cable network. I could see an agitated owner firing off a wild screed. But another rally like that would shock me.

Herring: Fact. Narratives and voter fatigue clearly played a role. Derrick Rose’s team won slightly more and had the best record. But LeBron had superior counting and efficiency stats; led the NBA in win shares and value over replacement player; and was far superior on defense, which he showcased by locking down Rose in key moments during the conference finals. Still, LeBron finished third in the voting, behind Dwight Howard, who also had a strong case over Rose.

MacMullan: Fiction. Now, if you want to rephrase and say could LeBron have won in 2011, then yes. He had a better PER than Derrick Rose, and his imprint on the game was indelible. But, I believe in the process of the voting, and at the time, the 22-year old Rose, who had not yet suffered his horrific, life-altering knee injury, was dynamic, exciting, prolific and led his Bulls team to 62 wins. Did LeBron, who finished third behind Dwight Howard, suffer backlash from his unseemly Decision? Very likely.

Arnovitz: Fact. It’s difficult to find any criterion — other than team wins — that values Derrick Rose more than LeBron James. Was this a narrative-driven vote and/or one that punished James for, in the eyes of voters, stacking the deck?

Young: Fiction. Rose was a perfectly acceptable choice. The Bulls were the top seed in the East, winning 62 games. There may have been backlash to LeBron’s decision, but it’s not as if Rose was undeserving. It followed standard MVP voting: the new, rising star leading a mega-market crown jewel franchise to the best record in the league. LeBron was sensational, because he always is, and we all know he could’ve won pretty much every MVP from 2008 on. But operating under the idea that someone else is allowed to win, Rose was a deserving winner.

McMenamin: Fact. He has four MVPs, which is remarkable, but he should probably have about six.

McMenamin: Meet expectations, which was winning multiple championships. Did we think it was going to start with a loss to the Mavs and end after just four years? No. But we didn’t anticipate that 27-game win streak, incredible comeback against San Antonio or dominant win over the Thunder, either.

Arnovitz: LeBron’s teams will forever be synonymous for coasting through regular seasons with unexceptional effort, but two titles and four trips to the Finals sounds about right. The 2010-11 Heat lost to a team with less raw talent, but apart from that, they shot par.

Herring: If we had known up front that he was only going to spend four years in Miami, then winning two titles — while playing in the Finals all four years — would have been a pretty reasonable prediction. Considering the strain that a run like that can take on players’ bodies (Wade’s struggles highlighted this), or the challenge of trying to continually put talent around an expensive core without ever having any cap room to actually do it, expecting anything more would’ve been unreasonable.

Young: Mostly met reasonable expectations. It’s easy to mock their era because of the “Not one, not two, not three,” proclamations, but look at their four-year résumé: four Finals, two titles, better than .700 winning percentage. They were the most reviled basketball team in the world, but also the most famous. The legacy of the Heat is balanced on a knife’s edge. If their series against Dallas goes their way, they are a dynasty. If Ray Allen’s 3 doesn’t fall in Game 6, they are a failure. So, they fall right in the middle of it.

MacMullan: Considering LeBron insisted the Heat would win “not one, not two, not three, not four, not five, not six, not seven…” I guess, in the end, you’d have to say they underachieved. For starters, they should have beaten Dallas in 2011; it was the lowest moment in LeBron’s career, but also a turning point. And as soon as the redemptive Spurs bludgeoned them in 2014, playing nearly perfect basketball to do it, LeBron was On to the Next. Who knows what would have happened if he’d stuck around?

5. What is the lasting legacy of LeBron’s move to Miami?

MacMullan: Player empowerment. Whether you liked or hated The Decision, it was a preview of LeBron seizing control of his own career in ways we’d never seen any other superstar do before. No more could coaches, GMs or owners dictate how long their franchise players stayed. The power irrevocably shifted to the athlete, thanks to LeBron. His NBA brethren should never forget that.

Arnovitz: James’ move to Miami represented a profound shift in power in the way teams are constructed — away from ownership and front offices and toward the superstar. James realized he and other generational talents drove the value of the NBA product, and he leveraged his equity to create a situation that suited his preferences.

Herring: I think it’s pretty clear, and it’s one that was reinforced by Kevin Durant’s decision in 2016 and then again by Kawhi Leonard and Paul George this past summer: That in this “rings” culture that’s been deified by so many talking heads and fans, players can flex their muscles and find ways to team up, either creating or joining situations that allow them to win big instantly.

McMenamin: The lasting legacy is NBA front offices planning their moves years ahead of time and making shrewd contract offers to assure their books are cleared to pursue big-name free agents in tandem when they become available like in 2010.

MORE: Here’s what really happened the week of LeBron’s Decision